A Fascinating Piece of Flying Boat Memorabilia....and the Forum's Help

Having been interested in flying boats for so long now, every so often I come across something that I never knew existed or am sent something, and it's the latter of the two that has recently piqued my interest; well, actually I have found it quite stunning..!

One night I received an email from a chap called Martin Smith, whose father was aboard Short S45 Solent 2 'Scarborough' when it crossed the Equator at 11.20 am on 25th December 1949 - under the command of Captain L.H. Carey - travelling South. He knew that much as the flying boats name was recorded on a certificate given to his Late Father to celebrate the moment of crossing for the first time. Martin still had the certificate, framed and hung on the wall in his house.

I knew from my family history that the issuance of some forrm of 'certificate' was common practice in the Royal Navy and aboard civilian ocean-going liners, but I never knew of it being done on flying boats before.

Say's Martin, "This much was recorded on a certificate bestowed on my late father by Phoebus Apollo himself which, in addition to confirming the above, initiated him into the Winged Order of Line Shooters. I'm not entirely sure what was the final destination -my father had business connections in both South Africa and Kenya and had by that time made the journey on a number of occasions".

Martin wanted to know more about the actual flying boat his Father had travelled on and, if possible, where it was going and find a picture of it.

I posted his request onto the SEAWINGS Flying Boat Forum and sure enough, the Guys there came up with the answers he wanted.

'Sunderlandnut' (from London) provided two good pictures and some other details, 'TonyR' (from Geneva) confirmed the route it was on and where the destination was likely to have been, and finally 'Pondskater' (from Southern England) provided a classic Short Bros photograph of 'Scarbourough' and scanned it in such high definition that it could be printed, framed and hung on the wall.

For the record, 'TonyR' said, "Passengers for Kenya usually disembarked at Port Bell in Uganda, which is about 1/2 degree north of the Equator. The ceremony of 'crossing the line' was usually held about 50 minutes after take-off from Port Bell, over Lake Victoria, en-route for Victoria Falls, where they landed after lunch. This would fit in nicely with the time on the certificate. If Mr Smith Senior had business interests in South Africa, he would probably have flown on to the 'Springbok Flight's final destination - Vaaldam, south of Johannesburg. Passengers then had a 2 1/2 hour journey to Johannesburg by coach, and any further transfers (Cape Town or Durban for example) could be made by SAA landplane".'Sunderlandnut' added, "This flying boat's surviving records show:-- Serial Number: S.1301 - Coded: G-AHIM - Named: 'Scarborough' - Built: Rochester - C/N S.1301 - C of A issued 24.5.48 - Scrapped Felixstowe 1956 by a Norwich based scrap merchants".

All this information was passed onto Martin, who was delighted with the findings as he had not expected that amount of detail after all this time had passed. But, the best bit was yet to come.........!

In a subsequent email to me, Martin asked if I had ever seen such a certificate as he had on the wall. I replied that I hadn't. Well, the next thing that happen was a large flat package turned up by Special Delivery and inside was the certificate; right off of his wall!!

However, the best bit was saved till last, for when I opened it I was stunned! The certificate was simply the most highly detailed and colourful document I have ever seen!! It was like looking at an explosion in an ink factory.......and this long before the advent of computors and technical drawing programmes. It is about 1" taller than A4 and just slightly wider. 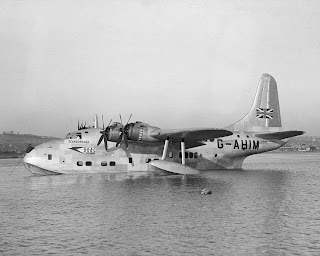 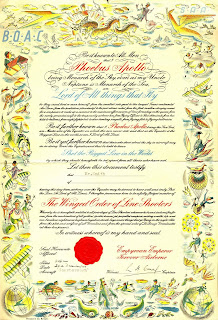 Martin very kindly granted permission for me to scan it at high-res and keep it for posterity which was extremely kind of him considering the scarcity of documents such as these and the priceless personal family value that it holds for him. I was quite honoured and just sat in the 'den' staring at it, considering where it had itself travelled and in one of the most iconic flying boats ever; all that time ago and all that distance and yet here in 2011, it is sitting infront of me in perfect condition, yet so delicate.
After scanning it was returned special delivery to Martin to be re-framed and hung back on the wall, this time alongside a large image of 'Scarborough'. Martin, thank you so much for the pleasure of sharing this most treasured possesion, with us all.
It just goes to show what is still 'out there' to be found and the power of a world-wide subject dedicated forum with really knowledgeable and great Guy's on it! (Oh, and three lovely females as well....!)
If you are interested in the history and facts behind the world's flying boats,you are more than wecome to register for the SEAWINGS Flying Boat Forum and come and join us! Follow the link from the SEAWINGS front page.
Posted by Seawings at 13:09

What a lovely story! Those seeking adventure in those days cetainly travelled in style and the certificate - what a piece of family history to treasure.

Would you believe that I too have one such certificate issued to my late uncle. After the death of his wife (my paternal aunt), the family decided I - as a travel writer - should be custodian of this piece of aviation history. I am now in the process of writing about it and its history and came across your blog.
Thanks for the lovely story which gives me some clues and prompts for the forthcoming piece I am writing.
Brendan Harding

Your story about the traditional "Crossing the Line Certificate", literally jumped out at me, for I have one of my own.

In June 1949 I travelled from Johannesburg to Southampton on the Solent 'Somerset' as a 10 - year old boy and my certificate shows that I crossed the line at 1559h on the 13.6.49 and is signed by Captain Glover.

I would also enjoy any further information about this aircraft and the infrastructure that kept this unique service running.

I wish I had been older at the time and more able to take in the detail!

Modern Navy VP squadrons did the same for their personnel. I got my bluenose certificate on a flight from Keflavik out over the Arctic Circle and back.
In my collection, I have a certificate for a crossing-the-line ceremony aboard HMS Hood.