Here's a few of the items that I'm currently working on to up-load shortly: 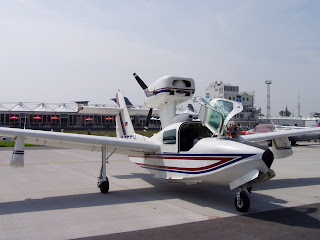 Recently, I was very, very fortunate to be in the 'right place at the right time' (which makes a nice change for me!) and came face-to-face with the only Lake Renegade amphibian that I have ever seen, but not only that it is also the only one on the current German Register!


The owner, Dr. Andreas Schall very kindly let me walk all around it and shoot pictures to make a complete walk-round gallery - all of this in nearly 36deg full sunshine. Boy, was it a hot day! But, Dr. Schall was a star! He put up with all my requests to "could you open this panel" and " can you shut the cockpit door, please" and even came up with a couple of suggestions himself - all-in-all, an enjoyable 45 minutes in his company. Then, it was a dash into the shade which just happened to be the port wing of the Plane Sailing, Duxford based PBY Catalina sitting right alongside it! There, I finally met with David Legg, correspondent to SEAWINGS on the Catalina par excellence!


You know, it can be a very 'lonely' sort-of task sitting here running the SEAWINGS site in its different guises such as the forum, and I do get an awful lot of e-mails from my correspondents all over the World that tie us all together which is nice but that is all it is - e-mails.


But it is SO nice when one finally gets to meet one of them, whichever one, something that has not happened that often in the past 10 years, and so meeting David as part of the Catalina crew was just like meeting an old friend again after many years away. What a thoroughly nice bloke! We had a long chat together under the Cat's wing and for me it was a highlight of the day, coming directly after crawling all over the Renegade. For the rest of the day I was smiling! Thanks, David. 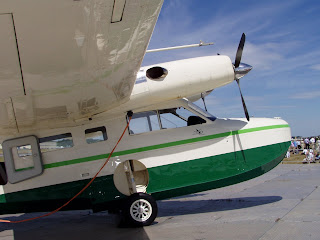 Next up I'm working on this beauty; the 'new' Grumman G-21G Goose from Triple S Aviation based in Dubai and thanks to Landon Studer the company's General Manager and Managing Director Saad Muhialdin, SEAWINGS was granted unlimited access and trust me, I made full use of that!


The excitement I feel when I get near to a flying boat (oh, and before you say it, I know it's technically an amphibian, but I class them all as flying boats in my world) is brilliant! To just be able to walk around one, see one, be near it and just gaze at it, for me, is all I ask...........then, to be invited to actually go aboard it, well, I can tell you a tear welled up! I was given the whole machine, for as long as I wanted it, go all over it, externally and internally, and then.......the pinnacle; top sit in the Pilot's seat - WoW and double Wow!!


There I was with a grin that would have had to be surgically removed sitting in the Pilot's seat - I mean, ME! Woooooo.....!


So, I just had to do her justice, and a huge photographic walk-round ensued, soon to be on SEAWINGS. 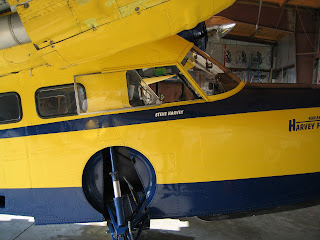 Sometimes, something special comes my way and this craft is no exception, for she is a working flying boat (amphib) - one of the very few nowadays -  and in one of the hardest areas of them all, Alaska.
Steve Harvey contacted me about joining the SEAWINGS Flying Boat Forum.
Whilst we were communicating, I asked him that if he had the time would he be kind enough to take some photographs of his craft, enough so that modelers could produce a scale model in these markings if they so desired. The result is another cracking walk-round to be up-loaded. Thanks, Steve.
And Finally...........
Whilst we are on the subject of flying boat enthusiasts enjoying themselves, AND getting to sit in the Pilot's seat of certain craft, one of the longest-time correspondents of SEAWINGS over most of its lifetime so far, is Alex Norton from Canada.


Alex often sends in material for me to publish on the site and has been a prolific contributor since the very early days. Again, we have never met but have this e-mail based relationship that I always enjoy, until now....................


Alex e-mailed me the other day. Been on a bit of a road trip, he said. Visited a few museums, he said. Then he sent these pictures......... 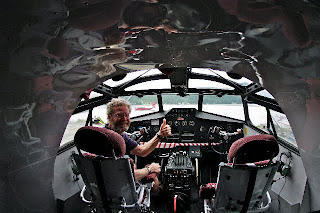 This is Alex in the cockpit seat of the Martin Mars at Sprout Lake...... 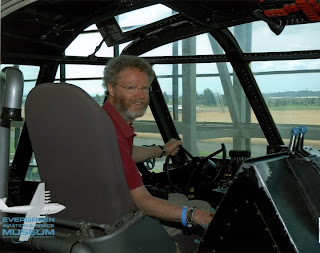 and this is Alex in the cockpit seat of the Spruce Goose.......
Alex, your KILLING ME!!  Stop it now!
You are single-handedly doing everything that I have ever wanted to do - and all in the same trip!
Good grief, can't you leave anything for me to do! :)
Seriously, what a trip - Oh, how I wish it was me I am so jealous! What a memory to take away with you forever.
Alex, good on yer, and well done. Having done those, where are you gonna go next?
Till next time, Regards, SEAWINGS
Posted by Seawings at 19:21